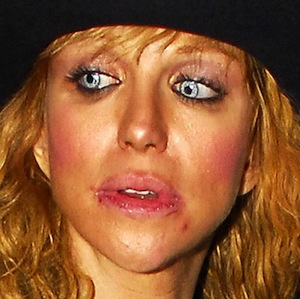 This is hilarious. Kim Kardashian is getting death threats from heartbroken Justin Bieber fans, after he jokingly tweeted on Twitter that she’s his girlfriend. But aren’t Babyface Bieber’s fans like 5 years old? Just tell’em to behave, turn out the lights and go to bed already. Sheesh, some people’s kids.

Poor poor Kendra Wilkinson. She’s been whining about her sex tape (yawn, hasn’t everyone but Betty White done a sex tape?), that it got released. But now it’s being revealed that she had intended to shop it around. So the issue isn’t that someone was going to release but that she herself lost control of the release. Look, Kendra, you’re attractive, like every other plastic doll that you look like, but sex tapes and reality shows aren’t that interesting anymore. You’d probably have more success in branding yourself if you got on Twitter and Facebook.

Is it true that crazy girls try harder in bed? At least, it seems to be true for Courtney Love. Says Love, “pretty girls just lie there. Us girls who grew up a little more homely have to try a lot harder.” Oh wait, she said homely, not crazy? Maybe in Courtney’s case, it’s both?

Speaking of crazy, remember how Joaquin Phoenix acted on the David Letterman show, announcing he was giving up acting to be a Hip Hop musician? He’s been acting Andy Kaufman- and Andy Dick-level weird since. Well it just so happens that Casey Affleck, Joaquin’s brother-in-law, is releasing his mockumentary film about this career change. I smell a stunt for the sake of the film, and we’ll likely see Joaquin back to “normal” after the film debuts, or maybe some time next year at the latest.

Other films about to be released include Super 8 from JJ Abrams, whose trailer will be airing with Iron Man 2, which starts Friday. More details from me after I see it, but Slashfilm does have a lot more about Super 8, including that it’s set circa 1979. The “spoiler” text in red reveals that it seems to be in the science fiction genre and involves some sort of creature. If it’s yet another movie shot on a handheld camera, I’m not interested. Cloverfield from Abrams was crappy enough and irritating thanks to camera jitter, not to mention static in POV (point of view).