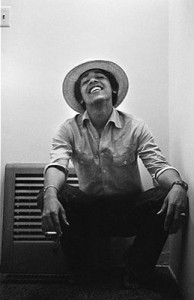 Photography buffs in LA, here is an exhibit that I am pretty sure you would like to visit. Dubbed Barack Obama: The Freshman, the photo exhibit will be running M + B, a gallery located at 612 North Almont Drive in Los Angeles. It started last week, on the 28th of May and will run till the 18th of July, giving you plenty of time to drop by and see the President when he was still in college.

If you have not heard of it yet, the photo exhibit showcases Barrack Obama as a college freshman. While we all have photos of when we were freshmen in college, the photos of Barrack are not incidental things. They were in fact taken by Lisa Jack, who was a student of photography back then. She had to choose a subject for a portrait project, and she chose Barrack. Lisa chose him for the simple reason that he was charismatic. After the shoot, the photos remained hidden – they had served their purpose.

Lisa Jack had no way of knowing that Barry – Obama’s nickname – would ever be the leader of the country one day. Well, he did, and she was dared by a friend to unearth those photos. At first, she was worried that they could be used against the President. But she knew that there was nothing wrong with them and so decided to launch the exhibition.

If you are far from LA, you can see some of the photos at M+B’s web site.