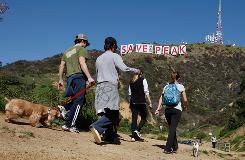 Earlier this month the iconic Hollywood Sign was covered up for five days with red letters spelling out the phrase “SAVE the PEAK”. The sign was covered by the “Save Cahuenga Peak” campaign, whose aim is to keep the 138-acre tract of land located behind on the left of the Hollywood sign the way it is right now. The land is currently privately owned and is set to be developed so that the view will eventually be marred by mansions. In order to protect the land, the campaign has to raise a total of $12.5 million by April 14, 2010. The money will be used to purchase the land and so hopefully preserve the view.

Right now though it seems that the campaign is not taking off as well as they would want it too despite the support of celebs like Julia Louis-Dreyfus, Tippi Hedren, Aisha Tyler, and John Slattery. The Save Cahuenga Peak campaign site shows the online campaign progress at just $40,355, a mere 8 percent of their target $500,000. We can only hope for them that the celebs will be more receptive to the cause and start turning out their pockets in a hurry. With all the natural disasters happening all over the world today though and so much charity that needs attention most might feel that trying to save a sign, however iconic it is, should come second to giving to the more worthy causes. And with the economy you can expect that only those who have a really special connection with the Hollywood sign will be willing to spend money to save the sign.