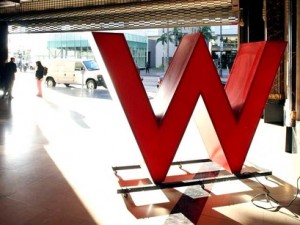 Hollywood now comes with a big W. I don’t mean HollyWood but the new W Hotel and Residences that opened last Friday on the corner of Hollywood and Vine.

The W Hotel is a mixed-use development with hotel suites and apartment for a total of 143 residences, restaurants, clubs, shops, and a subway station right underneath it. The W Hotel also has energy efficient rooms and is expected to draw more tourists to Hollywood.

The W Hotel presents $350 million in investment, which is expected by the city government to be pumped right back to the economy. In terms of employment this will be true since it will bring about 500 jobs, good news with the still struggling economy. Aside from the jobs they are hoping that the development will end up revitalizing the whole area surrounding the hotel. According to Gatehouse Capital CEO Marty Collins, “It creates and really anchors a vision that allows the whole area to expand and really in some ways become back to what it once was before, that whole renaissance of Hollywood.”

However, some are already calling the hotel “ungainly”. As Christopher Hawthorne, architecture critic of LA Times, said, “The rather ungainly result… is not what you’d call an elegant addition to the rapidly expanding Hollywood skyline,” but even he has to agree that how this “urban-experiment” will end is still a puzzle that will only be solved by time. For now we can be sure that this curiosity will be the talk of Hollywood; as to what people will be saying, we can only wait and see.