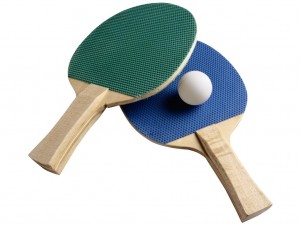 Forrest Gump may have been a ping pong sensation back in the day, but that did not really propel the game to the top of the list of “cool” games. Many many years later, it seems that the game has gotten the break that it deserves, for it is now the “in” past time of Hollywood celebrities.

The Independent – a UK newspaper of all things! – recently ran a feature on this phenomenon:

It has to be one of the unlikeliest Hollywood pastimes yet, involving two people, a couple of vaguely S&M wooden paddles and a hollow plastic ball. Whisper it: ping-pong is cool.

Forget scout huts and church halls – on Saturday, the latest achingly hip New York table tennis venue will open its doors to an adoring star-studded following. SPiN New York will be an exclusive ping-pong parlour big enough to house the sport’s growing number of A-list devotees who turn up, bat in hand, at ping-pong social clubs around the city.

So who are the people who have been captivated by this sport?

Among the Hollywood elite captivated by the craze are the actors Ed Norton and Matthew Broderick, and the actress Susan Sarandon – who will be cutting the ribbon at SPiN’s glitzy launch. Even the rapper 50 Cent wants to be seen at America’s cult table tennis parties.

You know what? Call me nerdy or call me cool – it doesn’t matter to me. I love ping pong. It used to be my sport of choice and now that these Hollywood bigwigs are playing it, I can’t help but feel a sense of vindication. 😉