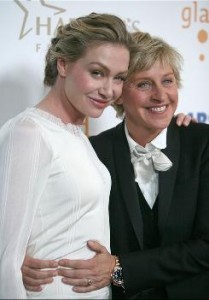 Prop 8 has got to be one of the most controversial pieces of legislations ever. It has got people from all sorts of backgrounds speaking their minds. And of course, in Hollywood, most everyone has joined the fray. The general consensus – as was to be expected, I think – is that upholding Prop 8 is not right.

USA Today featured some quotes about Prop 8 from prominent Hollywood figures. Here are some of the more interesting AND sensible ones. (Yes, everyone is having their say but some of them just do more harm to Prop 8, I think.)

George Clooney to E!: “This just should invigorate people to get it back on the ballot in 2010 and 2012 and every two years until all people are allowed a basic civil right.”

Yep, this was voted on. Those who didn’t vote do not have a right to complain.

Charlize Theron to E!: “I am deeply disappointed by the (California) Supreme Court’s ruling on Prop. 8 today. I don’t agree with homophobia or discrimination of any kind. I will continue to fight this fight for equality and speak up for the basic civil rights of all Americans.”

I don’t agree with homophobia or discrimination either. Then again, the issue runs deep and touches faith and beliefs. It’s not that simple.

Demi Moore: “There’s no room 4 judgment it only creates separation & i’m pretty sure we R all equal in God’s eyes. luv is luv in whatever form! … Amazing the country that likes 2 pride itself on liberty & justice 4 all can continue 2 fail certain groups!”

That’s on Twitter, and she does have a point on liberty and justice.

So is Hollywood right on this one? What’s YOUR say?