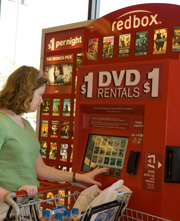 Hollywood relies mainly on one thing for revenue: making movies. While there are many other streams of revenue in this town, movies are what really rake the dough in. That is why when something threatens movies and the revenue they are bringing in, Hollywood execs are quick to go up in arms.

The latest threat comes in a unique shape – that of a big red box. Dubbed Redbox, this “threat” is a self-serve DVD rental kiosk which is placed in strategic locations all over Hollywood. The price of a rental is a mere $1, making it such a convenience for anyone who wants to watch a movie. Being self-serve, the Redbox kiosks are open 24 hours a day, 7 days a week. There is no danger of having the movie rental store close on you or anything like that.

While people might be happy about this development, Hollywood execs are not. In fact, they are taking rather drastic measures in order to stop this threat from becoming a full blown problem. The management of 20th Century Fox, for example, has already issued a directive that their wholesalers are not allowed to sell DVDs to Redbox until a month (30 days) after the initial release. Obviously, this step is meant to help increase the DVD sales before Redbox can release their own for rental.

I know that the movie companies are out there to make money but in these hard times, average people like me really really appreciate services like Redbox. Heck, that’s better than downloading movies illegally, right?