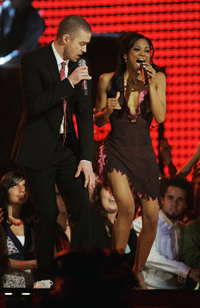 Talk about irony, last year’s Grammy Awards show suffered in the ratings because their network chose to pit the show in a head to head battle with American Idol. This year they opted to taje another time slot which was great and they had their own little Americon Idol like competition. They called it My Grammy Moment and the winner got to perform on stage with Justin Timberlake at this year’s Grammys. Here’s where the irony comes in: the winner of the My Grammy Winner is an American Idol reject.

As the winner, Robyn Troup did get her moment of fame with Sexy Back Star Timberlake on Sunday. On Tuesday the episode of American Idol which was taped before the Grammys aired showing that she was rejected by American Idol.

Take heart though Robyn. Being rejected by the judges of American Idol does not mean the end of your career. Look at Jennifer Hudson. She beat out her American Idol batchmate and winner Fantasia Barino for the part that gave her her Golden Globe and her Oscar.