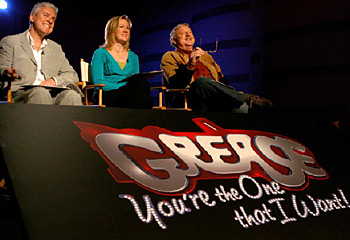 The search is on for the new Danny Zuko and Sandy Dumbrowski. The names don’t ring a bell? These are the lead characters played by John Travolta and Olivia Newton John in the movie “Grease”. Now, a different kind of audition and one of the biggest casting calls has taken place to bring in the new leads for the original high school musical.

Talk about American Idol meets Broadway. You’re The One That I Want is reality TV show that is the biggest casting call for the lead role of the hit musical. The 12 finalists were chosen from among thousands of hopefuls. Everyone from teenagers to housewives; in fact anyone who wants to get on Broadway, had musical talent and loved the show has tried out. There’s a very real gem of a prize at the end – performing on Broadway and not just a trophy and cheque.

The only female judge for the show is Kathleen Marshall, who is the Director and choreographer for the upcoming production. She is joined by co-creator of the musical, Jim Jacobs and David Ian, the theatrical producer. The show will be hosted by Billy Bush of Access Hollywood” and British Star Denise Van Outen.

Olivia Newton John is scheduled to guest on the first two episodes of the show as well.