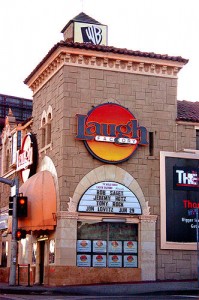 Hollywood isn’t just all about glitz, glamour, and drama. Indeed, much like other entertainment capitals in other countries, Hollywood has its share of humor. One of the most famous comedy bars in this part of the world is The Laugh Factory.

The Laugh Factory is located right smack on Sunset Strip and has been there since 1979. Founded by Jamie Masada, this comedy club has been a big hit since its opening. Jamie Masada is no stranger to comedy. According to him, it was actually love at first sight – and his first sighting of a comedy show was when he was 6 years old. And what was it that made him fell in love? An episode of The Three Stooges. Enough said.

I don’t know about you but if I were to visit Hollywood, I wouldn’t miss this comedy bar for the world. Think about it, walking up and down the streets of Tinsel Town will tire you out eventually. Shopping in the glitzy areas just might drain your pockets. Riding tour buses can be exhausting. What better way to end your day by spending several hours just sitting around with your favorite drink and listening to other people try to make you laugh and forget all your worries?