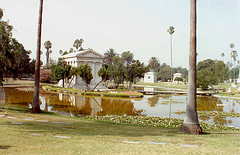 Cemeteries may not be for everyone but some of them are quite interesting. Certainly, a cemetery where some of the most famous figures of Hollywood are interred would be interesting to a lot of people. This is exactly what the Hollywood Forever Memorial Park is all about.

Located at 6000 Santa Monica Boulevard, the Hollywood Forever Memorial Park was built in 1899. In true Hollywood fashion, the cemetery was filled with monuments and old-fashioned headstones. Indeed, some of the monuments and headstones were not the ordinary ones that you can see in the average cemetery. A few of them are of unique shapes.

The Hollywood Forever Memorial Park has two major mausoleums, both of which house some of the most famous Hollywood stars. The first mausoleum is found in the western area of the park and is called the Abbey of the Psalms. The second mausoleum is found at the south of the lake and is called the Hollywood Cathedral Mausoleum. Though I would like to give you a rundown of all the stars interred in these mausoleums, time and space do not allow it. You can visit Seeing Stars for a more detailed tour, if you wish.

More than the mausoleum, the park boasts of a lovely lake, which many say is the most beautiful part of the whole park. In the middle of the lake, you can find a large Grecian tomb, wherein William A. Clark Jr. He may not be well known to the general public but he was the one who founded the Los Angeles Philharmonic.