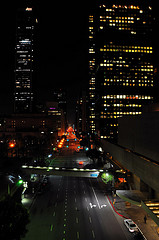 One reason some people like to live in cities is the fact that skyscrapers abound. At night, they really do make the skyline a sight to behold. If skyscrapers are a measure of a city’s aesthetics, then L.A. has another point coming its way.

Yesterday, the Los Angeles City Council approved plans for a new 23-story condominium tower. This new high rise is planned to be built at the old site of the Spaghetti Factory restaurant. The now vacant place is now going to be replaced by a new skyscraper plus two humongous billboards on its south and west sides.

However, it seems that not everything is going so smoothly for the proponents of this project. There are some critics who have been voicing out their concerns regarding the zoning and the plans. For example, zoning regulations require that the project provide 512 parking slots. However, the plans only provide for 416. Despite the objections, however, the project has been given the go signal.

On the part of the Council, their argument is that their aim is to encourage residents to use their vehicles less. Less parking means more people should walk, I suppose. I do not know if the plans can be stopped at this point. Looking at the positive side, the new high rise would provide more office and residential space, which is already at a premium. For tourists’ sake, I hope that the building would be another beautiful edifice to behold.