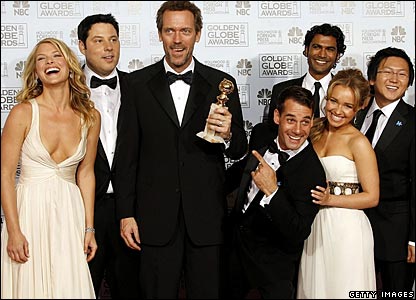 A star studded and absolutely glamorous affair, the 64th annual Golden Globe Awards had everyone who is anyone in Hollywood seated at the tables. It was the first major award show to be held for the year and honored some fine shows indeed.

The guests arrived wearing mainly black and white, plus a few metallic ones. Some of the best dressed celebrities for the night include Jennifer Love Hewitt, Penelope Cruz, Renee Zellweger, Eva Langoria and Reese Witherspoon. Hilary Swank had a really eye catching jeweled flower hair accessory that did wonders to make up for her simple black dress.

Hugh Laurie’s wish for a Dolce & Gabana acceptance speech brought some laughs as did Clint Eastwood’s repeating part of Jennifer Hudson’s acceptance speech. As expected Jennifer Hudson took home the best supporting actress award for her part in Dreamgirls. Best Supporting Actor went to Eddie Murphy, also for Dreamgirls. This was a first for both of them. Meryl Streep took home the Best Actress award for her role as the boss from hell in The Devil Wears Prada. Best Motion Picture went to Babel.

Looks like Hollywood is indeed off to a good start in 2007.