Yo ho ho! The Pirates Of The Carribean are celebrating indeed. It is early in the year and already they have bagged some really cool awards. Specifically they’ve taken home the following awards from the People’s Choice Awards: 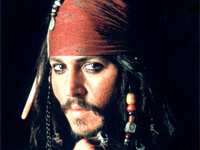 Johnny Depp’s speech hit the note perfectly when he said:

“I know that I’ve said this before but the fact that this award comes from the people makes it all the more special. And thanks for keeping me employed, yeah? You’re the boss.”

The winners for the People’s Choice Awards are selected purely by viewers of the films and TV shows. Since the average citizen makes up 99% of the viewers, these awards are quite significant and the people definitely love Johnny Depp. Having Orlando Bloom and Keira Knightley on board as well just adds to the draw.

There’ll be a lot of people looking forward to the third film of the Pirates. The film goers definitely can’t get enough of the swashbuckling Captain Jack Sparrow and his crew of miscreants. This time they’re out to rescue the Captain from the Kraken. This should be an interesting adventure indeed.