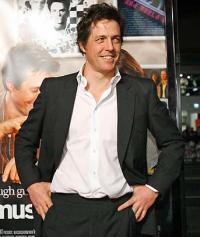 Actors have to put up with a lot of things – from a loss of privacy, long working hours, ridiculously high pay, screaming fans and of course, the papparazzi. Never did Hugh Grant expect though that he would end up in handcuffs with a fan though. Grant was at the premiere of his new movie, Music and Lyrics, in Amsterdam. Suddenly a Dutch reporter, Cielke Sijben, slipped handcuffs on the actor – talk about new accessories.

Grant handled it well. He simply continued to stroll down the red carpet as if nothing happened. The fire department managed to separate him from his companion in about ten minutes though he had to wear his new bracelet throughout the premiere.

As for the Dutch reporter, Sibjen is said to have been placed in police custody immediately after being separated from Grant. A Dutch website, RadioBitches, reports that the 22 year old joined the Dutch TV Network 101 TV in 2006.