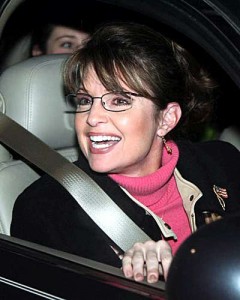 We all know who Sarah Palin is. The running mate of Republican presidential candidate, John McCain, Sarah Palin is the current governor of Alaska. She is known for many things – some funny, some positive, and some negative. It really all depends on your perspective. Now I am not about to cast any judgment here nor am I to further any political cause. What I am about to share is something that a Hollywood public relations consultant said.

Michael Levine, head of Levine Communications is reported to have said that she is “the hottest property in media.” Reuters has this write up:

“My sources confirm producers and agents all over showbiz are trying to figure out what to do with her. One serious possibility could be an Oprah-style talk show,” the head of Levine Communications said in a note circulated to reporters Friday.

He added that “she’s a perfect fit as a TV host, stirring passions on both sides, which is a winning formula for large viewership.”

In case you have not heard of Michael Levine and you do not know his reputation, here is a bit of info from their web site:

With over 25 years experience LCO – Levine Communications Office – has garnered a reputation as a leader in the field of Public Relations. Clients have and continue to include some of the most renowned people and corporations, names such as Barbra Streisand, Charlton Heston, Robert Evans, Michael Jackson, David Bowie, Nike, Sharp and Pizza Hut.

Those are big enough names to establish the reputation of the guy, aren’t they? So, Sarah Palin fans – you just might see more of her in the future, no matter what the results of the elections may be.