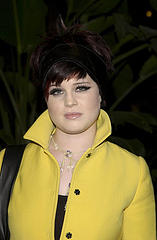 While attending an AIDS charity benefet at the Koko Club in London, Kelly Osborne revealed that a member of her family has AIDS. Osborne says that taking part in the charity is a very important to her because of this and that she is very proud of her relative. She did not specify who it was though she did say it was a male.

Kelly Osborne and her mom Sharon have both been involved with various HIV charities. It is only now however that any personal motivation behind their decision to support the campaign has come to light. Kelly Osborne was looked very emotional and tearful as she made her revelation.

Kelly Osborne attended last night’s charity event with her cousin Terry. The 40 year old is the star of the television series “The Salon”.