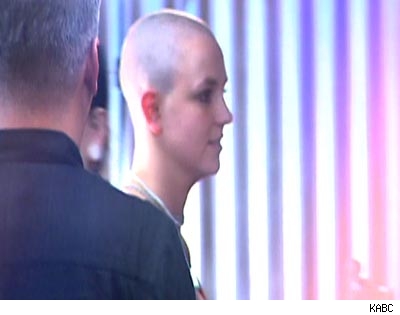 Britney Spears has been trying very hard to stay in the public eye. She knows that being seen around about or in the papers, tabloids and gossip rags that the papparazzi work for or supply pictures too. Britney has been seen without her knickers while out on the town with Paris Hilton and Lindsay Lohan, dancing and stripping at various Las Vegas clubs and now, she has gone bald.

Yes it was a surprise to almost everybody. No one expected the pop princess to go and get rid of her hair. It is a very drastic move and it makes Britney appear very stressed.

Britney’s new look was discovered when she was on her way to the “Body and Soul” tattoo shop. Britney had two tattoos placed. The first one is on her wrist and the other on her lower hip.

People are wondering if she is close to having a nervous breakdown. She’s been acting wild since she filed for divorce. It sure looks that way to her fans.