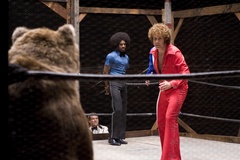 Randy Miller, the owner of Rocky, is being investigated by PETA to determine whether his actions somehow contributed to the fatal “attack” of the bear on it’s trainer, Stephen Miller.

Stephen Miller died after being bit by the 700 lb, 7 1/2-foot-tall bear on the neck while shooting a promotional video. Witnesses claim that the bear bite was an accident and that it was just a playful behavior on the part on the bear that turned into a tragedy since the trainer was bit in a very vulnerable spot. One bite was all it took. Prior to the biting incident everything seemed to have been going well with the bear was licking Stephen Miller’s face. Everyone who’s been in contact with the bear knows that the bear is actually surprised because Rocky is known for his good disposition and is fact touted as being one of the “best trained” animals in Hollywood.

Despite the bear’s good record PETA seems skeptical about the bear’s state especially since last year, during an inspection, they have deemed Miller’s training facility and sanctuary as not suitable for many of the wild animals that lived there.

Whatever happens this is indeed a tragedy not only for Stephen Miller and his family but also for the bear who surely was not at fault, accident or no.

Rocky is best known for his appearance in Semi-Pro with Will Ferrell.