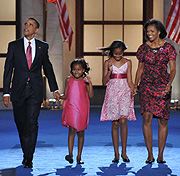 Disclaimer: This is NOT a political endorsement nor is it propaganda. I only wish to report what has happened on a momentous day in American history. 😉

Today, Barack Obama made history when he gave his acceptance speech for the Democratic Party’s presidential nomination. Thousand of people were there to show their support – including a veritable host of Hollywood stars. Hello Magazine writes:

Among the stars gathered in a Denver stadium to watch the Hawaii-born nominee speak – 45 years to the day after Martin Luther King made his famous “I have a dream” decalration – were Oprah Winfrey, Susan Sarandon, Anne Hathaway and Jessica Alba.

Others, like Jennifer Hudson, contributed to the evening’s entertainment. The Dreamgirls star took to the stage to sing the national anthem, while Stevie Wonder also performed, along with Sheryl Crow – who sang Change Is Gonna Come. Black Eyed Peas frontman will.i.am, meanwhile, teamed up with John Legend for a rendition of his song Yes We Can, which was inspired by the ground-breaking new nominee.

It seems that Hollywood has made up its mind about who it is going to support come the elections. Do you think that this support will somehow influence the way the voting is going to go nationwide? Hollywood is definitely a leader and model for many people all across the country (and across the seas as well) and I am thinking that the support of the stars will be nothing but good for the presidential candidate. What do you think?