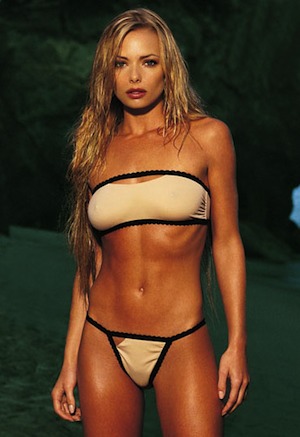 So one more actress, Jaime Pressly, just got a boob job, obviously forgetting that some men prefer natural at any size over pneumatic. Apparently Pressly did it to deal with her own insecurities, but I wouldn’t be surprised if some petite starlets with absurdly sized implants had it in their contracts to do so. Too bad. She seemed just fine before the fact, as the image at right suggests.

Charlie Sheen has until just before May 19th to decide if he’s going back to Two and a Half Men next season. That’s the day CBS announces its fall schedule. While Sheen is asking for as much as $2M per episode, apparently he really doesn’t care if he comes back or not. Not sure if the show could survive without him, despite the great (if raunchy) writing team. If the show ends, Angus T. Jones will cease to be the richest kid on TV. (But then again, Jones is considering college in the next few years and isn’t sure he wants to continue acting.)

While Sheen might not be eager to return to his show, for Bret Michaels, the “show” seems to be what he lives for. After only just being released from a near-fatal brain hemorrhage, he’s expected by his band to be on stage again later this month, but there’s a backup plan for emergency stops, if they become necessary.

Eddie Murphy initially denied being the daddy, but is trying to make good but trying to spend time with the now 3 year-old daughter, Angel, that he had with Spice Girl Mel B, aka Scary Spice, aka Melanie Brown. Sure, he only admitted it after a paternity test. Now, IMDB has him listed as having married once, with one wife (Nicole Mitchell Murphy, divorced), with whom he had five children. But NY Daily News says he had six kids with Nicole and the daughter with Mel B is his eighth child. So someone has their information wrong.