Everyone knows that coming home to your loyal canine best friend is a great way to end the day. Dogs and cats are both ideally suited for cuddling, playing and staving off emotional illnesses like anxiety and depression. To prove they are a bit like us, the stars have taken to showing off their furry best friends in the public eye. These famous critters may not have exceptional show talent, but they have certainly become beloved alongside their humans. Included here are a few of the most famous pets in America, (and their celebrities). 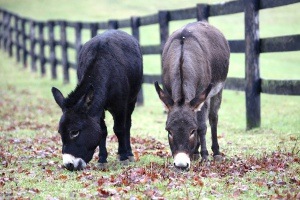 If Reese Witherspoon was any more country, she would probably have a donkey… oh, wait. Witherspoon’s two lovable donkeys named, Honky and Tonky, are a troublesome, lovable, noisy duo. Lovingly referred to as Witherspoon’s “badonkadonks,” the pair have received more than a few letters about their late night braying sessions.

With a diva name like Baby Luv, it is no surprise this pet kinkajou belongs to Paris Hilton. Owning an exotic animal like the nocturnal, rainforest kinkajou is illegal in California, but that doesn’t stop Hilton. She has suffered a bite from her Baby Luv and had to be taken to the hospital, but still seems to enjoy cuddling with the feisty furrball. 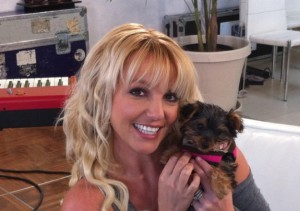 You may be surprised to realize that some animals are more popular on Twitter than you are. With over 60,000 followers, Hannah Spears, Britney Spears’ puppy, has garnered quite the following for herself. Since the Yorkshire Terrier’s debut in 2012, Hannah has managed to rub shoulders with a multitude of celebrities, from Miley Cyrus to the Kardashians. At only two, she has certainly seen her fair share of the celebrity spotlight!

If owning albino king cobras is on your bucket list, know that Nicolas Cage already beat you to the punch. A pair of cobras will set you back about $250,000 so prepare to face some significant financial expense. Cage has proven to be responsible with his snakes and keeps an antidote for snake venom on hand for himself and guests. Strangely enough, albino cobras are not the weirdest animal Cage has had, as he previously kept a highly dangerous octopus.

The debonaire style of George Clooney may not appear to mesh well with pot-bellied pigs, but that is exactly the kind of pet Max was. After 18 years at Clooney’s side, Max passed away in 2006. In spite of receiving flack from more than one female companion, Clooney chose to continue keeping his pet pig, while other friends described them as “inseparable.” Max certainly enjoyed a luxury lifestyle on set with Clooney and getting a ride on John Travolta’s jet.