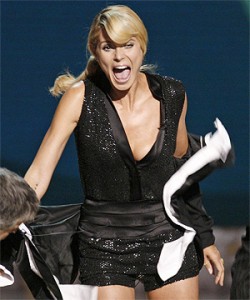 We should have seen this coming. For each movie released, each show produced, and basically anything that happens in Hollywood, critics are all up and about and ready to share a piece of their mind with the general public. So why should the recent Emmy Awards be any different? Interested in what the critics have to say? Here are some of the more interesting bits.

As Mary McNamara of the Los Angeles Times said, “If we come away with nothing else from this year’s Emmys, let us all agree that having a host with some experience actually entertaining people is not a luxury, it’s a necessity. The show never quite recovered from its unforgivably bad opener or its less-than-useless hosts.

I would agree if I were a winner and I was not allowed to speak more than 2 seconds – which happened quite a lot this time around.

Frazier Moore of the AP recalled, “There have been boring, listless and otherwise ham-handed Emmy broadcasts among the past 59. Sunday’s Emmycast was all of those things. But ‘The 60th Primetime Emmys’ also seemed an inadvertent homage to the 100 days of the Hollywood writers strike last season, when the shows that were able to continue demonstrated what TV without writers is like.

Still doubt the important role that writers play in Hollywood? Watch the Emmys and doubt no more.

David Zurawik of the Baltimore Sun said, “While it was exciting to see history being made, as entertainment, the telecast emceed by five reality hosts was without a doubt one of the worst in history. It was tedious from the moment Tom Bergeron (‘Dancing with the Stars’), Howie Mandel (‘Deal or No Deal’), Jeff Probst (‘Survivor’), Heidi Klum ( ‘Project Runway’) and Ryan Seacrest (‘American Idol’) hit the stage and did 12 minutes of chatter about not having an opening monologue or remarks. The segment ended with two of the reality guys ripping off Klum’s tuxedo to reveal a skimpy showgirl outfit. Yawn. The boredom was momentarily relieved only a couple of times.”

So what do you think? Are the critics right on the spot?