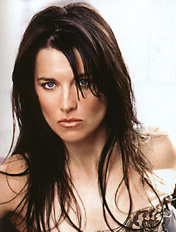 She may be better known as Xena, Warrior Princess but acting isn’t all Lucy Lawless was born to do. At 38 she has chosen to launch her singing career. She had her first rock concert last night at the Roxy Theater in Hollywood. Some were surprised that it was completely sold out.

Fans of Lawless aren’t the least bit surprised. They’ve known that she can sing from the episodes where she sang on Xena. She has also played Rizzo on the Broadway production of Grease in 1997. And she joined the Celebrity Duets show last year where she made it to the final three.

In fact it is because of Celebrity Duets that Lawless decided to try for a singing career. She enjoyed the live performances very much and missed them after the show ended. She decided to take a chance and have a concert. Looks like she’s off to a new career. Just goes to show you that age really is no barrier to talent – and great fans.