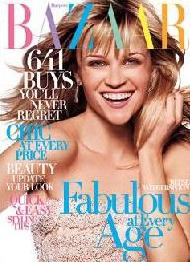 Reese Witherspoon and Ryan Phillippe broke up last year. No word was leaked of the true reasons why. Both actors don’t seem to be grieving though. Both celebrities look like they are moving on just fine.

The actress has revamped her look as part of her new status. Look out, baby, her comes a brand new Reese Witherspoon with a much better sense of style thanks to Nina Ricci designer, Olivier Theyskens. Witherspoon says that she cleaned out her closet, creating on the floor a pile of clothes that she admits were influenced by her various roles and were not at all to her personal taste. Sounds like it was a much needed ‘Queer Eye For the Straight Girl” thing without actually being on the show

If anyone is thinking that this girl is at home, grieving her loss while Phillippe up and does the rounds of the latest Hollywood ladies, they can think again. She has her new beau in Jake Gyllenhaal, who may soon be stepping into a superhero suit soon as either Captain Marvel or as the new Spiderman – replacing Tobey Maguire.