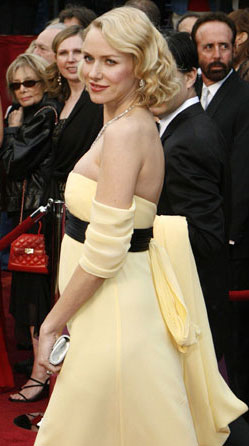 Speculation has been running high for weeks on whether Naomi Watts is pregnant. No one from the camp of the star of King Kong and Mulholland Drive however has come forward to confirm the rumors til Monday night. Watt’s boyfriend, Liev Schreiber, himself did so on the Conan O’Brien show.

Even if Schreiber hadn’t said anything though, it was already pretty obvious. As she stepped out on the red carpet at the Oscars with Nicole Kidman, the yellow Escada gown she had on lovingly traced the shape of her baby bump. The dress designer himself spilled the beans about it saying, “The Escada gown set off her most precious new asset – the baby she is expecting with longtime boyfriend Liev Schreiber.”

Schriber says that he is excited to be a dad and will definitely not name his son Liev as it is one of the most mispronounced names in history. This is their first child together and Watts was very excited that her baby got to attend the Oscars, even as an embryo.