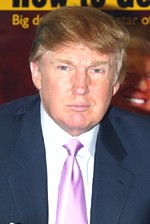 Yes, you read right. Donald has said that he wants to build a mausoleum where he and his family can be buried at the golf course. He specificaly wants to place it at his New Jersey golf course. The Donald says that if approval is given by the state and local boards, he’ll set it up to the right of the first hole of the course.

The planning board and state officials said that they’ve never received an application to build a museum on golf grounds before. The Donald says he understands and knows that approval may take time. He said that in the meantime, it can be a wedding chapel. They’ll simply transform it later if approval comes through.

Just imagine yourself on a bright, sunny day, right beside a mausoleum at the start of your game. It adds a bit off a creepy feel to a golf course though some will call probably it character.