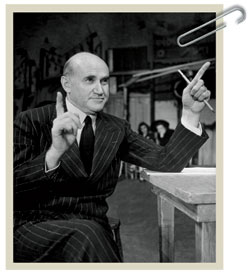 Sam Goldwyn is one of the key players in Hollywood History. He established many of the major studios — including paramount, MGM, and United Artists. He produced several films, including classics like “Guys And Dolls” and “Wuthering HEights” and worked with directors like Billy Wilder, and Ford, and actors like Mary Pickford, Charlie Chaplin and Brando.

Goldwyn epitomized the success of the Hollywood dream, rising from poverty as an uneducated Jewish immigrant to one of the industry’s movers and shakers. He had a quirky sense of humor.
and is credited with phrases like, “Gentlemen, include me out” and “a verbal contract isn’t worth the paper it’s written on.”

In 1946, he also said: “Hollywood pays too much attention on star value and not enough on entertainment value.” So true!