We all love to watch movies where on screen couples have a certain special attraction or chemistry. When an on screen couple can make this happen it creates a movie that is special, and it usually turns an average romance film becomes a box office smash. 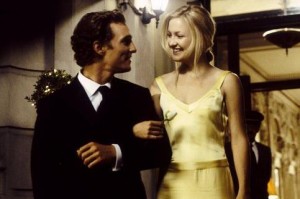 10. Richard Gere and Diane Lane. This on screen couple has appeared on screen together 3 times. Their latest effort together was Nights in Rodanthe. They also shared the screen in Cotton Club and Unfaithful.

9. Richard Gere and Julia Roberts come in as the next most popular on screen couple. They made two movies together but they were both blockbuster hits. The movies were Pretty Woman and Runaway Bride.

8. Keanu Reeves and Sandra Bullock. They have starred in an action movie, Speed, and a romantic movie, The Lake House. In one the couple showed their spunk and in the other they showed their true chemistry making them a top Hollywood couple.

7. Adam Sandler and Drew Barrymore made The Wedding Singer and 50 First Dates together. Both of these were romantic comedies that showed them as a cute and crazy couple.

6. Matthew McConaughey and Kate Hudson. This couple has also starred in two films, How to Lose a Guy in 10 Days and Fool’s Gold. Both are stars on their own, but they create sparks while being an on screen couple.

5. Woody Allen and Diane Keaton. This odd couple seemed to have been made to share the screen and have co-starred in many movies. From Annie Hall and Manhattan to Manhattan Murder Mystery they make co-starring together seem easy.

4. Tom Cruise and Nicole Kidman. They seem to have true passion in their movies which makes them a popular couple. They have been seen together in hits such as Days of Thunder, Far and Away, and Eyes Wide Shut.

3. Tom Hanks and Meg Ryan. Consummate professionals made it seem as if their on screen relationship was just an extension of their off screen relationship. They appeared together in When Harry Met Sally, Sleepless in Seattle, and You’ve Got Mail.

2. Fred Astaire and Ginger Rogers. Although they shared the silver screen many years ago people still talk about their chemistry and their dancing. They starred together in many movies and their names are synonymous with the idea of a perfect on screen couple.

1. Spencer Tracy and Katharine Hepburn. They were in 9 films together which sets a Hollywood record and makes this couple the number one on screen couple. Some of their most popular films where Woman of the Year, Adams Rib, and Guess Who’s Coming to Dinner.

This guest post was written by Joy. Joy is a sucker for Romantic Comedies and is a content writer for movies.com.au