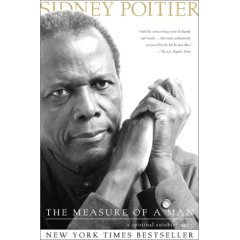 It has been a year since Oprah has recommended anything to her book club. Many speculate that she took a break from recommending books after she recommended the book of James Frey which turned out to be a work of fiction and not fact as he had claimed. Her choice to start of the new year and relaunch her book club: Sidney Poitier’s “Measure of a Man”.

The book was actually published in 2000. It was on the bestseller weeks for years and the audio book won Sydney Poitier a Grammy Award. It is a spiritual autobiography that largely talks of what makes the character of a man. He talks of his memories growing up, of plays, his views of racism and of great leaders such as Nelson Mandela and Mahatma Gandhi.

Sidney Poitier is a man much respected in Hollywood and is one of Oprah’s personal heroes. On her radio show, Oprah said,

“He writes really candidly and passionately about his childhood, his family, relationships and his extraordinary career,” Winfrey said on her show, which airs from Chicago. “It (the book) really is about what makes character, what makes you be who you are. He is the measure of one of the greatest men I think who has ever been on our planet.”

Oprah also said that she hadn’t had time the past year to really read books which was why she hadn’t been recommending any. She had been busy preparing the curriculum for her school. Now that she does have the time, she chose to recommend a book that she loves about a man she truly admires.