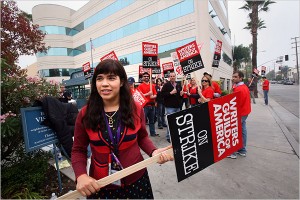 We all heard about the writers’ strike that happened in Hollywood last year. Well, folks, the troubles in Tinsel Town are not over yet. Apparently, the negotiators for the Screen Actors Guild are calling for a strike vote. Mid last week, the negotiating committee of the Guild recommended that its 120,000 members vote on whether to strike or not.

According to their rules, at least 75 percent of their members should agree before a strike can be carried out. Hollywood Insider has more on this:

SAG is the lone holdout still negotiating a new contract with the Alliance of Motion Picture and Television Producers (its previous deal expired in June). Guilds for the writers, directors, and daytime actors all signed new pacts with the major studios in the last year. Internet residuals continue represent a key sticking point in SAG’s stalled talks with the AMPTP. According to the advisory motion approved by the negotiating committee, “Negotiators…have requested that the AMPTP return to the bargaining table to negotiate a fair deal, and the AMPTP…has refused to change their position and continued to refuse to meet to attempt to advance the negotiations.”

The AMPTP responded by questioning whether this was really the time to talk about going on strike, especially given the dire situation on Wall Street. “Not only is the business suffering from recent economic decisions, but if ever there was a time when Americans wanted the diversions of movies and TV, it is now,” the AMPTP said in a statement. “The DGA, the WGA, and AFTRA reached agreements on comparable terms months ago, during far better economic times, and it is unrealistic for SAG negotiators now to expect even better terms during this grim financial climate. This is the harsh economic reality, and no strike will change that reality.”

Indeed, this is one of the worst times to go on strike – even those in power may not have the means to change things. We will see what happens on October 18, when the board meets.