It isn’t as if kids of Hollywood celebrities don’t already attract too much attention by just being children of their parents that they just have to get the attention of “fashion critics” for their individual sartorial styles.  Celebrity magazines provide a peek of the clothes they wear at their every outing in a very consistent manner that it would be hard not to notice.  Each child who is undoubtedly under the watchful eye of an equally fashion conscious parent, always comes out in style even in the simplest garb.

This girl can probably get away with anything in terms of clothes.  She is very rarely seen in public looking like she never gave a thought to what she’s wearing.  Her fashion sense earned for her , her own set of paparazzi literally waiting at the family’s doorstep to get the first glimpse of her clothes.  She has recently been spotted in less “formal” attires but no less fashionable specifically when she is in the company of her mother Katie Holmes after her estrangement with Tom Cruise.

Kingston definitely has his own style with a little help from his designer mom Gwen Stefani.  He has been spotted in the most outrageous and the most impeccable fashion display that it is always exciting to guess what he’ll come up with next.    He appears to be enjoying the freedom of being able to dress up the way he wants to.

Angelina Jolie and Brad Pitt’s daughter seemed to have set her mind for now for a “tomboyish” look with results that are practical for her age.  Her outfits are as interesting as the other two child celebrities in this list.  These three may have different fashion sense from each other but they seem to make it work individually.

Gossip has long been associated with the movie industry.  It is almost impossible to think of Hollywood without it.  In more ways than one, it is like a substance that fuels continued interest in the industry and the people that move within it.

We are quite familiar with the saying that says: “Good or Bad Publicity is still publicity.”  The origin of these words is not quite clear but it can be safely surmised that it came from someone in the industry probably rationalizing what good could be obtained even from negative stories.  For many who are still trying to make a name for themselves, caution is often thrown to the wind just to have that so-called “15-minutes of fame” .

That is why we see so many celebrities seemingly haunted by past indiscretions and bad decisions.  It is easy enough to decide when one has nothing to lose but such decisions backfire once celebrities attain their much desired fame and popularity.  When one is famous, it would now seem that there is everything to lose.

Many of these celebrities who have allowed themselves to be part of a less than proud moment in their lives are victims of a system that takes advantage of limited opportunities and difficult circumstances.  It is quite obvious that if they had the power to undo such a past, they would have done it in a second.  Fortunately, many celebrities are able to stand against this test and it is noteworthy that who do succeed in overcoming such temporary setbacks are those with genuine talent to offer. 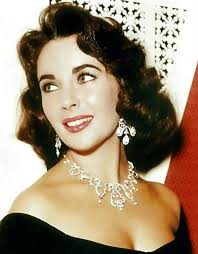 Not many Hollywood personalities have had the distinction of having their own diamond jewelry collection.  Among those who do, Elizabeth Taylor’s name stands out because her use of them were highly publicized.  Each piece has a story to tell, a memory to remember.

This was the 33.19 carat Asscher cut diamond ring most frequently worn by Elizabeth Taylor.  It was given by her former husband Richard Burton.  Prior to its auction sale, its estimated selling price was placed at $2,500,000 to $ 3,500,000.  It was sold for a record price of $ 8.8 million. 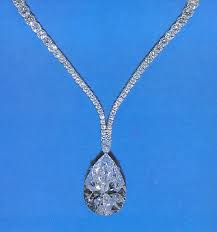 This was 69.42 carat pear-shaped diamond originally set on  a ring when purchased by Richard Burton for  $ 1,050,000 million in an auction.  Burton was outbidded by Cartier but prevailed after further negotiations.  Since the ring was too big for Taylor, the couple had it mounted as a pendant on a necklace designed by Harry Winston.  Taylor eventually sold it for the purpose of helping build a hospital in Botswana, Africa. 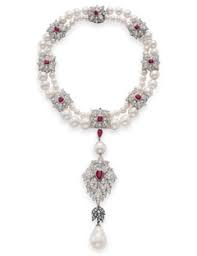 Richard Burton again bidded for this pear-shaped pearl and won against Prince Alfonso de Bourbon Asturias.  The occasion this time was the 37th birthday of Elizabeth Taylor.  Burton purchased it for $37,000.  This piece of jewelry has a long history which dates back to the engagement of Mary Tudor of England to Phillip II of Spain in 1554.

Richard Burton once again gifted Elizabeth Taylor with this diamond and sapphire sautoir necklace which featured a 321-carat Burmese sapphire pendant.  The occasion was Taylor’s 40th birthday.  Burton is remembered to have said that the only Italian word Taylor knows is Bulgari. 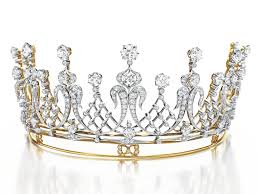 This was a gift by Michael Jackson to Taylor which featured five rectangular-cut diamonds and a three-row circular-cut diamond band.  It sold for $194,500 in the auction far beyond the expected price of $30,000 to $50,000.  The diamond tiara which was a gift from Mike Todd also fetched an incredible price of $4,200,000, setting a record for tiara selling in the auction venue.

In the recent auction, auctioneers were at awe with the unbelievable interest of individuals to purchase an item or items from the Elizabeth Taylor Jewelry Collection.    It was almost as if the price didn’t matter as final bidding prices literally rocketed to the roofs.  There is no doubt that the jewelries’ history of ownership is largely responsible for this as sounded off by Denise of DiamondJewelry.org.

From the late 1920s up to the early 1960s, Hollywood is said to have gone through its golden age. This was the time when studios were quite prolific in their movie production.  The movie that signaled its start was “The Jazz Singer” which starred Al Jolson.  The movie was such a success that it was able to single-handedly rescued the financially-strapped Warner Bros. Studio.  It was able to buy a string of theaters and this has proven to be a big advantage,  being producers of movies.

Hollywood was operating under a studio system wherein the studios makes movies and maintain thousands  of actors, directors, producers, and other people working in the industry under their employ.  These studios own hundreds of theaters were all their finished movies were just waiting to be shown.  The Hollywood star system was also in effect during this time as studios started creating their own group of bankable stars.

This was the time when the likes of Great Garbo, Humphrey Bogart, Clark Gable, Katharine Hepburn, Marlon Brando, Ginger Rogers, Vivien Leigh, and Shirley Temple, among many others literally hogged the limelight for being stars in their own right.  Disney also experienced its very first film animation success during this era courtesy of Snow White and the Seven Dwarves.  The films made during this time are considered classics.

The Golden Age of Hollywood was characterized by much elegance and glamour.  Movie stars were almost treated as more than earthly beings with the adulation showered on most of them.  This did not mean however that they were superior in any way but the mystique that was purposely created around them helped create such an illusion.

The younger generation may not have had the chance to see this exciting time in movies but they can see a glimpse of it when they get to watch classic movies.  Providers which specialize in classic movies may provide suggestions when viewers are looking into movie trailers for their next movie watch.  Seeing stars of the Hollywood Golden era in movies that made them famous is sure to be a treat.